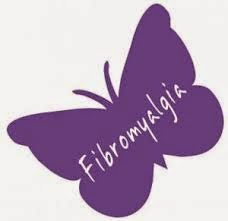 Today I would like to do a piece on a chronic illness which a dear friend of mine was diagnosed with some time ago.

I cannot remember when exactly she was diagnosed but I do remember going to look up what it was as I had no idea what it entailed and through doing that all I can say this this woman is a living inspiration to me.
Unfortunately I am not able to see her much these days but I did see her some time ago and I left her with a feeling of shock to say the least, she has always been the life of the party an outgoing, vivacious and just amazing woman who lights up every room she enters she is still that person of course except now you can see the pain in her eyes and it honestly broke my heart to see this amazing woman who now has to cut working hours and stay home mostly because she is living in constant pain.

I have heard many people say that this whole illness is made up that it is nonsense etc and I know she herself has received more than her share of bad comments- I can tell you that just by looking at her it is not made up it is VERY much real and I cannot imagine the pains she endures on a daily basis in order to survive.
As always she is a survivor she remains positive and above all I have not heard one complaint come out her mouth other than she wishes they could find a good doctor to help. 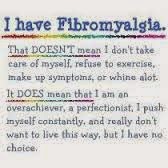 In her honour I would like to spread the word out about this very real and serious condition hopefully if people are made aware they will become more understanding….. 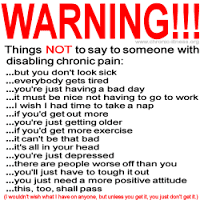 Fibromyalgia, also called fibromyalgia syndrome (FMS), is a long-term condition that causes pain all over the body.
As well as widespread pain, people with fibromyalgia may also have:

The exact cause of fibromyalgia is unknown, but it's thought to be related to abnormal levels of certain chemicals in the brain and changes in the way the central nervous system (brain, spinal cord and nerves) processes pain messages carried around the body.
It's also suggested that some people are more likely to develop fibromyalgia because of genes inherited from their parents.

In many cases, the condition appears to be triggered by a physically or emotionally stressful event, such as:
Who is affected?

Anyone can develop fibromyalgia, although it affects around seven times as many women as men. The condition typically develops between the ages of 30 and 50, but can occur in people of any age, including children and the elderly.

One of the main reasons it's not clear how many people are affected is because fibromyalgia can be a difficult condition to diagnose. There is no specific test for the condition, and the symptoms can be similar to a number of other conditions.

How fibromyalgia is treated

There is currently no cure for fibromyalgia, but there are treatments to help relieve some of the symptoms and make the condition easier to live with.

Treatment tends to be a combination of:
Exercise in particular has been found to have a number of important benefits for people with fibromyalgia, including helping to reduce pain, considering you are in constant pain I can imagine this would be extremely difficult.

How Is Fibromyalgia Diagnosed?

Research shows that people with fibromyalgia typically see many doctors before receiving the diagnosis. One reason for this may be that pain and fatigue, the main symptoms of fibromyalgia, overlap with those of many other conditions. Therefore, doctors often have to rule out other potential causes of these symptoms before making a diagnosis of fibromyalgia. Another reason is that there are currently no diagnostic laboratory tests for fibromyalgia; standard laboratory tests fail to reveal a physiologic reason for pain. Because there is no generally accepted, objective test for fibromyalgia, some doctors unfortunately may conclude a patient’s pain is not real, or they may tell the patient there is little they can do.

A doctor familiar with fibromyalgia, however, can make a diagnosis based on criteria established by the American College of Rheumatology (ACR): a history of widespread pain lasting more than 3 months, and other general physical symptoms including fatigue, waking unrefreshed, and cognitive (memory or thought) problems. In making the diagnosis, doctors consider the number of areas throughout the body in which the patient has had pain in the past week.

Will Fibromyalgia Get Better With Time?

Fibromyalgia is a chronic condition, meaning it lasts a long time—possibly a lifetime. However, it may be comforting to know that fibromyalgia is not a progressive disease. It is never fatal, and it will not cause damage to the joints, muscles, or internal organs. In many people, the condition does improve over time.

What Can You Do to Try to Feel Better?

Besides taking medicine prescribed by your doctor, there are many things you can do to minimize the impact of fibromyalgia on your life. These include (these are tips found online, I am not a doctor)
What Research Is Being Conducted on Fibromyalgia?

The National Institute of Arthritis and Musculoskeletal and Skin Diseases (NIAMS) sponsors research that will improve scientists’ understanding of the specific problems that cause or accompany fibromyalgia, in turn helping them develop better ways to diagnose, treat, and prevent this syndrome.

The research on fibromyalgia supported by the NIAMS covers a broad spectrum, ranging from basic laboratory research to studies of medications and interventions designed to encourage behaviors that reduce pain and change behaviors that worsen or perpetuate pain.

Following are descriptions of some of the promising research now being conducted:

Understanding pain. Research suggests that fibromyalgia is caused by a problem in how the body processes pain, or more precisely, a hypersensitivity to stimuli that normally are not painful. Therefore, several National Institutes of Health (NIH)-supported researchers are focusing on ways the body processes pain to better understand why people with fibromyalgia have increased pain sensitivity. These studies include:
Improving Symptoms. A better understanding of fibromyalgia and the mechanisms involved in chronic pain are enabling researchers to find effective treatments for it. Some of the most promising lines of research in this area include the following:
NIAMS-supported research is also examining ways to help people maintain helpful exercise programs. Because many people with fibromyalgia associate increased exercise with increased pain, doctors and therapists often have a difficult time getting patients to stick with their exercise program. The new research is examining patients’ fears that cause them to avoid exercise as well as behavioural therapies to reduce fears and help them maintain exercise.
Other groups of researchers are examining the link between sleep disturbance and chronic pain in fibromyalgia and are studying whether behavioural therapy for insomnia might improve fibromyalgia symptoms.

I hope this information helps to shed even a small amount of light on this subject, I tried to keep it as basic as possible and I hope that by reading this a person will become more understanding of anyone they know who may have Fibro, 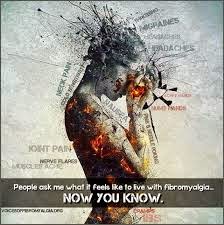