Hasbro gaming- Don't Step in It 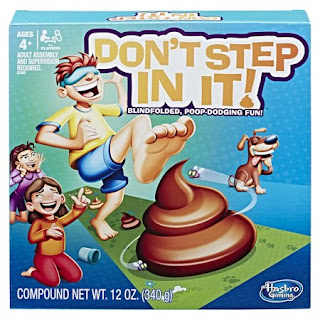 Christmas is around the corner and I know in the rush everyone is running around trying to find those last minute gifts so I decided to share this rather different but very fun game with you- I know that I generally look for at least one game for the kids to share or that we can play a a family.

Don't step in it is admittedly a rather ominous sounding game, I know when I heard it I was like ok rather an odd choice for a game but hey I have 3 boys 2 of  which in particular love dirt and anything gross so it sounded like it was just up their alley.

So the game arrived and it was just as it sounds- players are blindfolded and need to navigate across across a plastic floor mat depicting a garden floor, now of course it wouldn't be don't step in it without something to step in right so the game also includes 4 pots of erm poop brown play dough along with a poop shaped silicone mold in order for the poop to be made to look somewhat realistic. 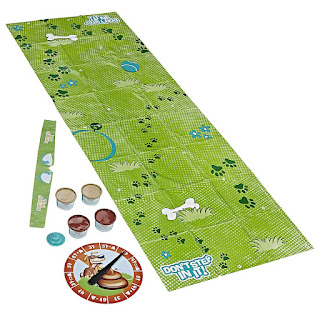 So I have to admit I have sensory issues, taste, texture and feel related like I cannot eat anything with the texture of squash, butternut or sweet potato I literally throw up and so when it comes to poop I don't really care if its play dough and I know that it is play dough if  I step in that I am going to throw up that aside I was also a bit apprehensive as special needs kids can often be very sensitive so even though it is up their alley I wasn't sure which way this was going to go once they realized that they may actually end up stepping in something so I decided to pull it out with my youngest first.

Jesse was extremely excited he loved using the play dough and mold to create the poop and setting the game up, it was really easy for him and I like that your kids can actually get involved and enjoy the set up.

So we were set up and ready to go, I blindfolded Jesse and just as we were about to start he chickened out, lol he put his foot near the poop shaped mound and nope nope nope he decided that was close enough.

So unfortunately we haven't made it through a game yet, my older two come home Xmas day so I do plan on pulling it out again and I really think that my older two will enjoy playing this game, I also think that once my youngest sees his brothers playing he will want to as well, so I do plan on sharing a post review and pics on social media next week however since we are leading up to xmas and we have gone through the set up process etc I wanted to share our experience so that if you are looking for something extra that is fun and different I think this game will be a good choice.

You are looking at a R400 price tag which honestly when I look at the price of games and Board games in general these days in on Par, the only thing that you may need to replace is the play dough if it is not kept sealed and in a cool area, not difficult to replace but that could also be a factor - not the end of the world though but something to keep in mind.

If you are looking for something that is fun and interactive and something that would amuse a large age range I would say this is a good buy, my youngest is 5 and he was thoroughly amused by the idea I think as long a your child is comfortable with being blindfolded and understands the very basic concept they would be fine, the box says ages 4 and up I would say I know kids as young as 3 that would be able to play this just fine, your child can also play this game in a group as well as on their own.

You can purchase this game online or at any store that stocks Hasbro products, I have been told that it can be purchased at Toys R Us.