I have to be honest here when the name Fortnite was first used within our home I was less than enthused and just about rolled my eyes into the back of my head as we had just undergone the obsession that was Minecraft I wasn’t prepared for another trip down the rabbit hole of custom made figures and weaponry, thankfully I have a friend who makes awesome custom made props but still do you have any idea how much blood sweat and tears that involves…eventually I relented and it has now become a firm favorite within our household among all my kids and I have to say I think the characters are stinking cute.

So for anyone who is obliviously to the Fortnite craze;

Fortnite has become a worldwide phenomenon in the world of gaming and the Battle Royale game mode has drawn over 125 million players worldwide in less than a year! In the game, players can gather materials to create defensive fortifications around an objective or trap-filled tunnels to lure unsuspecting enemies to.

In Battle Royale mode, players can quickly traverse the map; protect themselves from enemy fire, or just delay an advancing foe by means of building obstacles and structures from gathered materials. Players are encouraged to be very creative in designing their fortifications.  Although Fortnite is a shooter game, it highly promotes creativity and the most creative and clever methods tend to be that of the winner.  Any gamer in the country knows of, or has played Fortnite and Funko has come on board to bring South African players the collectables of their favourite Fortnite avatars.

I love Funko pops and have been drooling over a fair number of them this year but I just know that one of this figures will make a perfect gift for my son this year, I like how the characters are both bright and sweet but that they also have a dark twist and Llamas come on, they spit they smell whats not to love right… jokes aside I think the figures are adorable and that they will make a great gift for any Fortnite or gaming enthusiast of any age.

The following Funko POP characters have been released to SA, just in time for Christmas:


Drift: Journey into the unknown, and find your way to victory.
Ragnarok:  The cold harbinger of fate.
Dark Vangaurd:  Exploring the outer limits.
Valor:  A beacon for hope.
Havoc:  Striking fear into the opposition.
Tricera-Ops:  Sink your teeth into victory.

My favourite so far has got to be Zoey and my son loves Ragnarok and Raven. 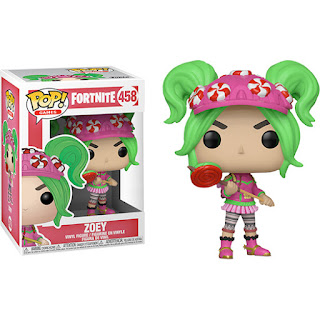 There are also a bunch more coming to stores in January 2019.