Today marked a great day in South African history, today thousands upon thousands of South Africans joined hands together, they formed human chains, they marched to Parliament, sang songs and raised their hands and voices together.

Over the past few days I will admit my mind has been preoccupied and I have been left in tears by all the posts involving Syria and all the deaths and photographs showing children who have been gassed and the aftermath, my heart has ached for a country not of my own, my heart has ached for a world which is falling apart at the seams, with violence growing extensively and innocent parties being the ones to pay for things that will never be comprehended or understood, mindless actions and thoughts of those in power or those who believe they are in power.

As I watched the footage and saw the photos of the various marches today my heart swelled with pride because this is what South Africa is and can be this is what happens when a nation is tired and has had enough of corruption and violence.  The pictures below represent a small portion of our city center in Cape Town today, this is only the tip of the ice berg of what turned out to be a peaceful protest in most areas, I know violence broke out at ANC head quarters in Jo berg and protesters who were doing nothing were attacked by those who back our ... ahem so called president.  but otherwise I want to thank each and every person who took the time to stand out there today. 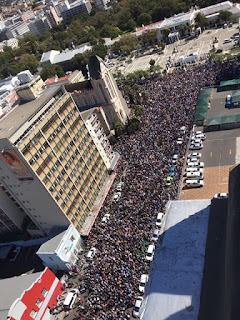 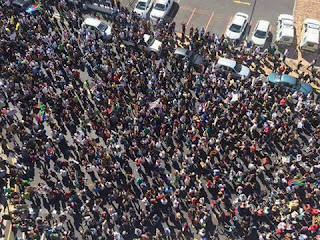 For my international readers who are not aware our so called president has basically screwed our entire country over since he came to power; he spent 246 million rands of our countries money on his house (which equates to 17846670.240 US Dollar), he has no education past grade 4 level (age 9), he has raped but told everyone it didn't count because he bought the woman a cab home afterwards oh and he dispelled aids by taking a shower!!!!!

He has 6 wives all of which our country supports and pays for, his latest fiasco lead to a cabinet reshuffle so he could sign a nuclear arms deal without the consent of the cabinet ministers he fired (who disagreed and wanted to go with sustainable energy), he then hired and shuffled people to the point where our minister of culture is now minister of police etc, this lead to an economic free fall and SA was given junk status, people are starving they cannot afford simple grocery items, they cannot find jobs and they have no where to go.

He has been voted in time and time again by people who only see what they are promised and when there is no delivery they blame an abolished movement that has absolutely nothing to do with it or the people who are being violent since they are to young to have even have been a part of what happened, hell I am to young, when apartheid was abolished officially I was 7 years old, people stand by a party and movement that freely and willingly admits corruption and fraud, they are not afraid because people keep on voting believing they will get what was promised or because it was the party of the struggle and their ancestors but they fail to see that the party no longer upholds what they ancestors and what the struggle stood for which was equality and unity and peace.

I am sure that when Madiba passed away it was with an ache in his heart to see what has become of our country and what he fought so hard for, what he spent so many years away from his family in prison for...

Jacob Zuma you are a disgrace to our country and its people, no one is safe and South Africa.

I hope in my heart that the voices of our beautiful country were heard today, standing together as one we will no longer be silent!
Posted by CrazyMommaofThree at 07:26