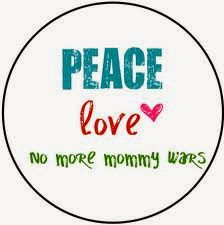 Mommy Wars- when woman who have children compete one over one another to prove that their child is the best- the smartest and the most developed compared to other babies or children in their surrounding circle and age group.

It can also be when moms/ woman compare their mothering choices to that of other woman in order to appear better than others. 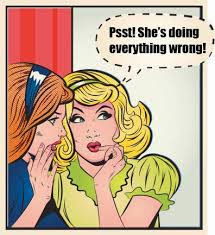 This is actually something I have found myself doing not on the side of my child is better, but just last week I was discussing Jesse with some colleagues and how he hasn’t started walking yet but his brothers were both walking by 13 months and several other kids younger than him are walking already etc.

Wish I could have smacked myself over the head there as there is absolutely nothing wrong with Jesse and the fact that he isn’t walking yet is completely fine, having met all his other milestones well and the fact that he walks alone things or walks when aided shows that he can and will walk when HE IS READY.

I would love to know when this started this whole thing of moms/ woman comparing their children with others worrying themselves sick because Jack isn’t developing as fast as sally who was born a week later or oh my child must be superior and brilliant because they are only 9 months and can walk already.
Everyone mom loves their child and in their heart sees them as the greatest and brightest, that is great and perfectly normal but what becomes a problem is when woman turn around and make other woman feel bad because their baby may not be developing as fast etc.

Every baby and child is different every one of them develops at their own pace; some babies may develop at lightning speed the 1st few months and then slow down while with others it is the opposite but mostly you find that children all seem to even out developmental wise around pre-school or school going age, that is not to say that you shouldn’t encourage your child to develop and achieve to the best of their ability however bearing in mind one thing.

Motherhood is already hard enough as it is, there is no instruction manual nothing that says this is how motherhood works- there are plenty of books on babies and children they contain GUIDELINES on how children should develop, if you look at most books today they are written into three columns – must be able to do, not must haves but can also do and then the column of so called super babies and I think that as soon as some woman see this column they are like ok my child is brilliant I simply must tell everyone, which is great again there is nothing wrong with taking pride and joy in your child’s development and actions however as I said before motherhood is so difficult as it is- it is a learning curve for both baby and mom and ok I may have a tough enough skin to say whatever my child’s fine and developing in their own time- I have the advantage of have several friends in the occupational therapy sector as well as nursing and psychology sector this helps a load because they know the guidelines of when something is just a phase or laziness and when it is something serious you need to worry about, it also helps that I have more than one child one of whom was a preemie, but not everyone has that, not everyone has a mother or family to help guide them or the education to know what is right or wrong, and not every mother has a thick skin- your one comment can be so damaging to both that woman and her child and for what so you can feel better about yourself for a minute.

Why? Why does your child need to be so much better than mine or vice versa it doesn’t mean anything or prove anything when they start school the teachers don’t turn around and go oh my suzie walked early she is going to be brilliant at English and maths, it doesn’t work that way.
It also doesn’t make you better for going through natural birth, breast feeding co sleeping and all those things, yes they are great things but that is a choice made by mom and baby not you and fiffie down the road.

Maybe that woman couldn’t give natural birth or breast feed or maybe she chose not to big frikken woop it is none of anyone else’s business- if they ask for advice or help great then give it but then know when to draw the line.

I have done a post on this before- it really makes me cross when woman are put down by other woman because of the mothering choices:

I am a ceaser mommy loud and proud; I only found out after birth no 3 that I cannot give natural birth.

I attempted and failed to breastfeed past 4 months with my 1st two children and they were put onto formula, yet I am currently sitting at 14 months of breastfeeding with Jesse.

I co slept with Loghan, didn’t with Gabriel and did for the 1st few months with Jesse.

Every child is different did any of these things do any harm to my kids absolutely not- their ceaser’s saved their lives, formula was a solution to Loghan’s lactose intolerance and kept Gabriel from starving when my milk completely ran dry during my divorce proceedings, sleeping in his own bed meant Gabriel slept better and through almost immediately however co sleeping meant that we were able to watch Loghan’s breathing and Jesse when he would throw up from reflux.

No woman or mother wants to feel like a failure I think we all need to look to ourselves and remember that. 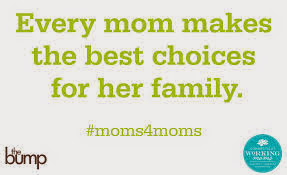