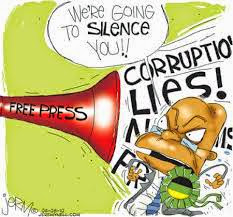 Just give us 5 years that is what Julius Malema has said coming up to the elections. Hmmmm sounds familiar doesn’t it, wasn’t that exactly what Zuma said the 1st time he was elected oh and the 2nd and what has he and the anc done for this country besides drag it through the mud and bring it down….NOTHING!!!!

Since the ANC took power in this country they have done nothing but bring our country down as the archbishop said we are now worse off than we were during the apartheid era and it is the truth, we hold some of the highest statistics in the world for things such as poverty, unemployment, crime, we have one of the lowest education rates and the highest teen pregnancy rates, as well as abuse and and neglect of children, women and the elderly, so what on earth do they think they have done, what can they answer for what do they have to show for their years in power besides a personal village that could have fed and homed tens of thousands and nothing but poverty and destruction, yet again they make the same promises and again there are those who will vote for them strictly because of their colour, either that or the EFF which is making the exact same false promises, how can they promise that they are going to inflate the disability and social grants by 100 percent, where do they think that money is going to come from….

Most certainly not their pockets, do people honestly believe that once he is in power he will continue to leave the lifestyle he was reduced to when his possessions were taken do they honestly think he won’t take the countries money and spend it on himself and his friends exactly like Zuma, except what he is talking of is a dictatorship and not a democracy.

Zuma is an idiot, Malema even worse because he is an angry vengeful idiot and yet people follow them blindly as if they can change everything and will do everything because of their skin colour, I wish these people would wake up, it is not about the colour of your skin it is about making the right choice and voting for a party that is actually going to do something for the people of this country, that will not selfishly lavish all the power and money upon themselves friends and family but give it to those who have worked for it and deserve it.

If I could choose a person to vote into power I would choose someone like the archbishop, what an amazing man, honest, intelligent and someone who has the wellbeing of the people in this country in his heart, someone who could lead this country to a better future not a blubbering imbecil who says eh we will tear down the toll roads inciting people to violence and destruction, wake up whatever is destroyed whether it be roads, houses, toilets, it all needs to be replaced and that only puts the people in a worse off situation, only the people suffer, and quite frankly as a tax paying individual who has held a job since the age of 14, I don’t see why I or anyone else who does the same should have to pay for the destruction and selfishness of others, I give back whenever I can it is not much but I give all I can when I can, but I don’t drive a new car, I don’t own a home I scrape by every month and work to earn what I need to support my family so why should I have to pay for houses of those who choose to sit and do nothing who plead poverty but refuse to work, who plead ill education and have 10 children but who can afford to drive BMW’s and have dstv, send their children to private schools.

“Victim of circumstances”, of their heritage but you are not you have hands and feet, you can work and earn your way up, no one should be handed a job based on their skin colour, a job should be earned and I don’t mean you need to have a high education I am talking about working your way up from the bottom like you should, earning something not just been given everything- apartheid is long over so why are we as a country and as a nation still paying for it, even those who would have been subjected to segregation and abuse during the apartheid era are suffering, poverty, malnutrition no education, even those who work and try to help themselves and their families suffer because we have a majority group who continue to vote for the same people hoping they will change because of their skin colour.

I can go on and on until I am blue in the face I can list the statistics and factual proof of what has been done or not done in our country but it probably won’t make much of a difference to those who are voting for the ANC and EFF.

Tomorrow I plan to make my mark and vote for a party who is going to in my opinion make a change they may not be perfect I don’t think any of the parties is but from what they have shown they will live up to their promises they will do everything in their power to create a better future for everyone in this country no matter their circumstances or race, my vote may or may not make a difference but it is my responsibility as a person living in this country to try help pave the way for a better future, if you do not vote don’t complain you do not have the right, one vote can make a difference because if you add up all the one votes that people choose not to make you have a great number that would definantly make a difference, don’t just vote for yourself vote for everyone in our country, vote for change and for our beautiful country which can still be saved.
Posted by CrazyMommaofThree at 02:40