what the hell Cape Town

For anyone in Cape Town SA right now I am sure you feel my pain this heat is killing me, I spent the majority of last night hunched over with a migraine and when it finally broke I threw up yay for tmi, I usually feel nauseous when a migraine breaks very rarely do I actually get sick and I was freezing so i went to bed with a warm wheat bag and blanket wrapped around me only to wake up at 12:30 dying of heat finally feeling better.

Came downstairs and spent about an hour watching telly with hubby and then back up to bed only to be woken up at 5am again.... thanks Jess.

Anyhoo I'm sharing this because on Wednesday I received a frantic phone call from a neighbor to come home asap as apparently water was flowing out from under our garage door, I spent a very quick car trip trying to figure out what the issue could possible be but nothing could have prepared me for what I came home to.

Just fyi if you aren't from Cape Town it stormed like anything on Wednesday, like seriously thunder lightening and downpour, however I never would have expected what I came home to which was a flooded street and partial flooded home!!!!

Seriously I had to park my car and get out into above ankle deep water, our 'garage' which is a computer room/children's play area is flush with the driveway which is a few cm above the street level and flat unlike our neighbors whose driveways are sloped, so basically we were the only ones who experienced water coming in.

It was incredibly frustrating and I think I both cried and swore for an hour, I ran in and lifted hubby's computer first as we cannot afford to replace a very expensive work computer, it was wet so I quite honestly thought it was done for, thankfully we found out later it survived.

We had to log a call with council and hubby got home a few hours later to help, the more I was shoveling water the more it rained and the more water came up from the drain that was blocked but the water was getting closer and closer to our actual house level which was giving me heart palpitations as our home contents are not insured.

Our neighbor also called council and by the time I had to fetch the kids they had still not arrived, eventually my dad came over and pulled some strings and they finally fixed the drain at midnight, in the interim we had to open drains etc and get as much water to flow out as we could, we did manage to stop the water from coming in but our driveway, street and backyard were still flooded until midnight. 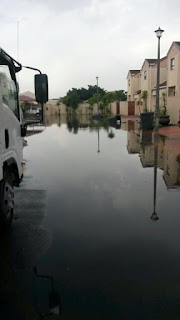 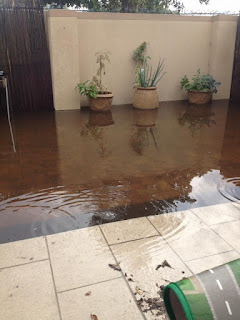 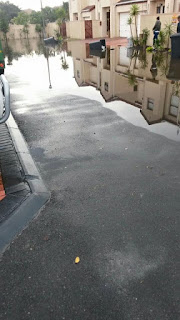 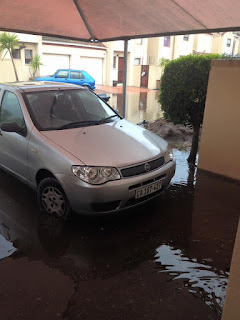 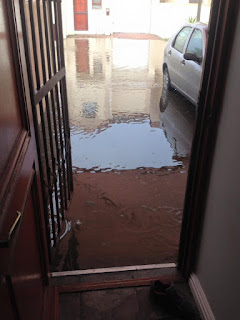 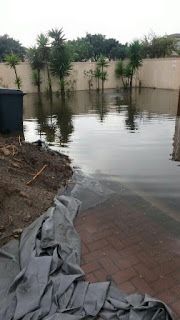 So we have had both a flood and a heat wave in the space of 4 days yay!!!

How is everyone else holding up with this weather, anyone else crying for winter like I am (even with the flooding).
Posted by CrazyMommaofThree at 22:40