On Saturday I attended my 10 year high school reunion… ten years guys TEN, I could scarcely believe it myself you rub your eyes at 21 and the next thing you are approaching the 30 mark and you get an event invite and what do you know reunion time.

I won’t lie and say I was very enthusiastic at first, matric holds some really great memories for me but also some really messed up ones that I don’t care to relive, I didn’t have many friends I was a very odd fish in a huge school (literally) of conformity, I had plenty of acquaintances which happens when you grow up with the same people and attend the same schools but for the most part most of my close knit friends are out of country so would not be attending.

Anyway as the time drew closer I didn’t think I would make it, it is hard to get a babysitter when you are broke and even more so when one of your children requires a lot of extra attention and just doesn’t gel well with everyone… and who do you trust, I did ask for family help but unfortunately that bailed through so I honestly didn’t think I was going until my hubby said I could go without him.

The feelings that I had as I drove up to the school were just unreal I really felt a bit sick, I felt out of place and thought what the hell was I thinking, I walked in and looked around seeing people I either didn’t recognize or people I didn’t get along with in school so I felt very overwhelmed, poured myself a glass... well kiddy cup of wine and walked outside for a smoke all the while texting my friend to find out where he was because I was seriously considering going home and calling it a oh well I tried.

But I have to say as the wine and shooters flowed everything became more comfortable and so did the memories… well the better ones at least, I got to see a few people who I genuinely wanted to catch up with, I got to see some beautiful relationships that had blossomed and catch up on those who had settled down and had kids.

We took a walk around the school, we peeped into the art class where we spent most of our time the artsy kids paint brushes in our hair, earphones constantly glued to our ears, I got to look across the field to where we would sit and smoke in grade 8 and where we sat and drank vodka and crackling from a water bottle (yes I know, no need for a lecture), so many memories good and bad the school really hasn’t changed at all.

I also got to do something that I haven’t in years… I got to just dance and have a few drinks ( tequila and Jager NASTY NASTY stuff) and just let live for the evening, its difficult most of the time when I go out with or without hubby you are always thinking about your kids, if they are ok, what if something happens, you feel so much mom guilt, Loghan begged me not to go and I really felt really bad, but I did go and in the end I had a blast.

Going home afterwards I have to say that my life may not have followed the most conventional path, yes I had a baby strait out of school, I was married and divorced with 2 kids in my early twenties and remarried, I studied one thing and ended up dropping out and becoming a worker bee, but honestly I felt humbled and blessed as I drove away, I felt great I felt like I have really done so much with the past 10 years, I have grown and loved and lived, I have been given the most amazing gift of motherhood and have been blessed to carry a few great friends into adulthood.

Yes things have changed we may not all get to see each other that often, we may have different goals and ways of life but in essence we carry so much of what we did in those years and I will cherish those memories as well as Saturdays forever.

I am also incredibly happy that my hubby didn’t get to see me dance whahaha. 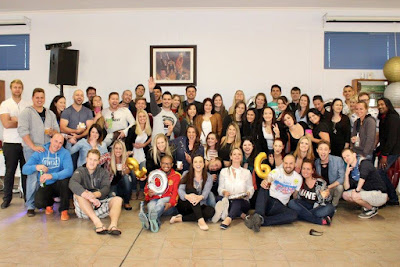