In other words an extroverted introvert, since I was a teenager I have struggled with these terms and I have had many people tell me I am somewhat confusing, woman mostly and it’s probably why I have always gravitated towards having male friends over female friends.

I can understand why it is confusing as a blogger who shares so much of my life and so many of my thoughts many would think that I am extroverted when I was younger especially I would go out to clubs etc no problem, I didn’t seem to have a problem around people, people may have found me to be a bit odd but no one would think that I have much of an issue with people or being around them, but I do.
To be brutally honest I don’t really like people, I have select groups of people that I enjoy the company of and I have many online friends and acquaintances whom I have never met and I’m just fine with that but other than that I am not a people person unless I am forced to be and find that in social situations I tend to come across at awkward or even at times rude because if I become too overwhelmed I tend to creep off into a corner and stay there. 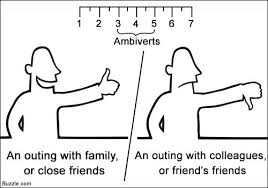 I HATE crowds especially when its people I don’t know, I hate crowded places such as shopping malls they literally make me want to crawl into a corner and cry, in fact when Gabriel was a few days old we were taken to Canal walk for Christmas shopping I spent nearly 3 hours holed up in the breast feeding room because I just couldn’t take it.

Don’t ask me to say a speech or talk in front of people I am more than happy to write a blog piece or even vlog behind a camera  but other than that the thought of being physically in front of people staring makes me feel sick to my stomach; even my sons orals give me anxiety so his social confidence is just awe inspiring to me, I wish I had the confidence that my 8 year old does, but I don’t, the world is just so loud so chaotic I find it hard to think and function…. 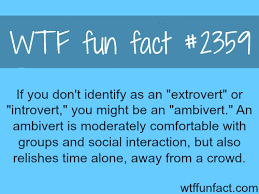 I know I am not the only Ambivert in the world there are many of us, and I think it takes a special partner or a like-minded Ambivert to understand and live with one, my husband at times is more introverted than I am he prefers to spend time at home alone just us instead of going out and yet he doesn’t have an issue at all speaking in front of people or speaking with new people, he may not like it but he doesn’t have an issue with it like I do, I know there are times when I completely break down in a crowded situation or just decide I need to drop everything and leave, I know it should be very embarrassing for him and yet he handles it like any other situation or day and I love him so incredibly much for it.

So there you have it for anyone who has been searching for an answer or didn’t know such a thing existed… it does and maybe now it will be easier to understand why a person may act a bit odd in certain social situations or events, it isn’t easy being like this I know at times I want to kick myself and just say get over it and just deal with it but I can’t and a little understanding just goes such a long way.