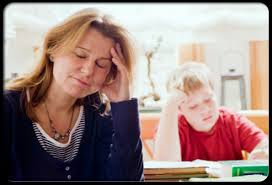 Being the mom of an Adhd child can be a very trying and challenging thing... my thought babble today comes around as it is the last day of the 1st term for western cape schools and this morning I could literally feel a weight lift off my shoulders.... 1 term down 3 to go.

Nothing prepares you for a child with special needs with my 1st pregnancy I remember my doctor asking me if I wanted to do the downs screening and amnio and I said No, I asked her if she felt it was nessesary and her reply was "only if you plan on doing something with the results", I have seen the difficulties moms face with special needs children and decided that what would be would be in any case all my children were thankfully born healthy.


learning disabilities and chemical imbalances however cannot be picked up with those kinds of tests, when Loghan was 1st diagnosed I remember scoffing at the thought of people calling him a special needs child because I didn't feel that it could be classed on the level of other disability's it was just a small learning disability and he would be able to function just as every other child does, 3 years down the line I know realize that I was wrong a learning disability is a big deal it inhibits a child from functioning in the same way as other children, the lack of a certain connection in the frontal lobe with ADHD children in particular means that they lack the cognitive function to think an action through and judge the consequences before doing something, it also means that they can be punished for something 50 times and will still do it over and over even though they know what the end result will be they just don't think about it at the time this leads to a very impulsive child who at the time acts out sometimes aggressively or severely emotionally there are times with Loghan when he has one of his episodes and all I can do is hold him tight until he calms down and stop him from hurting himself or anyone else it can be very disheartening and heart breaking.

When I first suspected Loghan was adhd he was very young, from baby stages already he was not the easiest child but he being my 1st I thought it was just part of the growing up process at 2 and a half when he started to suffer in social situations and act of that is when I started doing my research I was determined n ot to be one of those parents that stuck their child on ritalin, I believed parents who did that were lazy and to be quite honest it took me a while to even acknowledge that adhd existed my family everyone said he would grow out of it but he didn't.

So I changed his diet, created a strict routine, put him on every herbal supplement I could get my hands on, I tried every discipline technique possible and read books until I was dreaming about adhd and the statistics revolving around it which honestly are not very hopeful.

In the end after going through three schools we were faced with the inevitable, now not every adhd child needs medication some do very well on the homeopathic front or with diet routine and exercise and I would also suggest trying all of that first as well as being assessed professionally because the problem you face with an adhd child is they are often exceptionally bright- Loghan has a higher IQ than I do and my IQ isn't bad at 123, they are exceptionally bright and they get bored extremely easy so you are faced with a bright, easily bored child who acts on impulse, in our case we did put Loghan on medication and it has helped him tremendously on the school front his marks are top and he is able to get through a task without veering off or flat out refusing to do it because he doesn't want to or feels he knows the work already so it is a waste of his time and energy.

Socially we still struggle his chemical imbalance doesn't help the situation but we have thankfully found a great homeopathic range that has helped him tremendously.


That doesn't mean everything is perfect far from it, there are times when I just stand with nothing to say when he does something that other parents don't understand I find myself apologizing profusely for him on many occasions, I know he cant help it I know that he tries his best but it is not easy.

so this morning we are 1 term down and I can breathe a sigh of relief for every day we get through incident free, I am very proud of my son he is an amazingly gifted child and I cherish everyday of being his mother even though there are days where he hurts me emotionally I know that tomorrow is another day and it will get easier as he gets older and he learns the coping techniques that will help him function on the same level as everyone else, I have several friends who have children with special needs everyone of them is an amazing mom everyone of them lives for their children and I am so proud to have them in my life to see the effort the joy and the pain as they raise their children to be the best they can be.

A lot of woman I know have come to me for advice over the last year and its a good feeling knowing I can help other woman in this situation its also nice knowing that I am not the only one and there are people out there to talk to on the bad days.

Its difficult for teachers as well and I am so glad to have found an amazing GOVERNMENT school with teachers who care and want to help.

Term 1 I salute you may next term be even better.
Posted by CrazyMommaofThree at 06:02

Email ThisBlogThis!Share to TwitterShare to FacebookShare to Pinterest
Labels: ADHD