So we as parents all know how a craze can come into our lives at a feverish pace, in our days it was Pokémon slammers and Tamagotchi’s today’s; generation have had everything from loom bands to checkers minis.

So I’m pretty sure almost all parents have come into contact with, had to purchase or have at least heard of fidget toys, fidget cubes or fidget spinners, personally we have both in our household and I for one am constantly fidgeting even as an adult I am constantly tapping my foot or clicking a pen and I think that spinners and cubes are great when used appropriately i.e. they are not actually meant to be toys but anti-anxiety and focus aids.

Up until recently I was unaware of the vast array of fidget toys and resources available and so I was incredibly excited when I was contacted by the lovely Nicky Sacharowitz to review the latest fidget tool, the Fidget n' Flip. 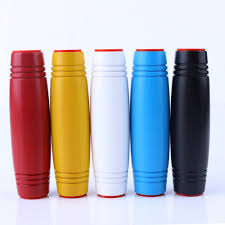 So what is a Fidget n' Flip exactly?

In short it is a desktop toy crafted from beech wood that can be used to aid and test concentration levels/abilities, creativity and to relieve stress, the flipper comes in a variety of colours and is small enough to be carried around in a pocket or purse, how simple is that right?

How does it work?

That is the first thing I asked when I saw a video tutorial of someone playing with the flipper, well the Fidget n' Flip has the ability to stay in the upright position therefore when you push it forward it flips and comes to a standing position once again, there are so many tricks available to sharpen and increase concentration and skill, in theory if you tip the flipper hard enough it will travel a greater distance, you can even flip 2 or more together.

The Fidget n' Flip promises to bring hours of entertainment which in truth I was quite skeptical of, I mean such a simple thing in today’s society where children are always moving onto the new thing and get bored so easily is this even possible?

So we were lucky enough to receive two of the Fidget n' Flip toys in black to review, the design is as I said incredibly simple but I remained a bit skeptical over the skill level as well as the boredom factor, I mean the videos looked amazing but my three are not exactly easy to entertain.

In any case when I arrived home package in hand I was immediately inundated with requests to see what it contained, I waited until after dinner and then handed the package over to my eldest son, he opened them and after about a minute of puzzling he put them on the table and without prior introduction or explanation he proceeded to tip them and they flipped, he was ecstatic and my other two came quickly clambering to see what all the fuss was about.

Now to be fair after my son had played with it for a while we established that it does require a certain amount of skill to flip the toy properly so that it goes the distance desired, however the concept is incredibly simple to grasp, even my 3 year old had a spin and was able to do it.  If you follow me on Facebook or Instagram you would have seen a video of my son playing the flipper not long after we received it.

My eldest however was the most entertained which surprised me as he is the hardest to satisfy in that regard, it has been a week and he is still playing with it on a daily basis and wanting to show them off to others.

One of the things I really like about the flipper is that it is simple; it draws attention away from technology and allows interaction if your child so desires because more than one child can play with one flipper.

Class use is however something I would not recommend, not for my kiddos in any case unless of course the kids are in free time or break time, in that case it would work fabulously but the toy has a wooden inlay and therefore it can be quite loud, it also as I have said draws a lot of attention from other children and I feel it would therefore be distracting.

Personally I even gave it a go and found it to be thoroughly entertaining and even relaxing, it does require a fair amount of concentration as well as hand/ eye coordination which is great for younger children as well as children on the spectrum or even those with focus or hyperactivity driven disorders.

So there you have it simple clean fun, you want to get your hands on a Fidget n' Flip or would like to learn even more about them you can head on over to Nicky’s Facebook page or website and let her know I sent you.

The cost of the Fidget n' Flip is R80 which is crazy affordable.

I hope that everyone is staying warm on this lovely winters day and I will catch you all on the next post!