If there is one thing that motherhood has taught me its to be quick of thought or fast on my feet so to speak.

I have explained before how important the whole tooth fairy debacle is in my family.  Loghan is at an age where he is starting to question belief in things such as fairies and father xmas etc, father xmas doesn't bother me but for some reason the tooth fairy does, I don't know maybe because it was such an important belief for me as a child.

Anyhoo Gabriel is still very much a believer and on Friday he happened to lose one of 3 lose teeth... yes three.  He was so over the moon excited and we laid his tooth out on a special china plate ready for the fairy to come in the night.

Friday night I wasn't feeling to hot and we had plans for the next day that had occupied my thought space for most of the evening so when I went to bed the thought of that tooth went completely out the window.

Until around 5 o clock in the morning when I felt a tugging at my duvet and heard the sound of a very distressed Gabriel calling out to me saying that his tooth was still there and what had he done wrong that the fairy had overlooked him.

He was shattered and so was I, how could I forget, what the hell, I had one thing... one thing to do!!!!

So he did... I waited 15 minutes, crept downstairs and quickly wrote a note in cursive script (so as to disguise my writing) explaining that the fairy was a new fairy it was her first trip and that she had gotten lost and was very sorry.

I rolled it up with a ribbon and quickly but stealthily headed upstairs to switch everything out and then just as I was climbing back into bed Gabriel came racing in to say he had seen me etc, I of course played dumb and said I had gotten up because Jesse had elbowed me in his sleep.

I still feel terrible, it was a narrow miss and I know Gabriel would have been incredibly devastated if I hadn't managed to make it right.

If this situation taught me one thing its that moms are ninjas I tell you plain and simple. 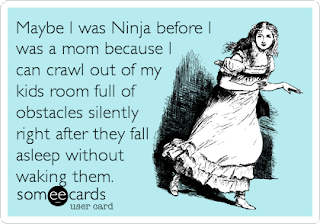