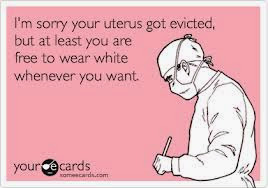 Sjoe its been a while since I've been able to post anything, as from my previous blogs I had my hysterectomy 2 weeks ago on October 2nd which a year ago was my sons official dd, so it was a very bitter sweet moment for me.


I finished up work the night before and to be honest I felt good, I was looking forward to finally feeling no pain to no more issues or problems in the uterus department and such, I got to leave early cause I had a few things still to do and I wanted to take a nice relaxing bath cause I was filthy from cleaning at work 1st off and 2nd I knew I wasn't going to get to bath for at least a week after my surgery I HATE showers they are so not relaxing but anyway picked up some sushi, it was the boys week at their dad so came home and relaxed and went to bed early.

We were up at 4:30 because we had to be at the hospital at 6am..... OMW.... not impressed especially since Jesse has his best sleep in the later hours of the morning so that is obviously when we get our best sleep, anyways dropped Jess and off we went and I felt fine until they wheeled me into the pre op area, it just hit me like a brick wall, this is it I will never be able to carry another baby, this part of me will be gone forever, I was very emotional but the nurses and doctors were amazing and so re-assuring, the next thing I was out and 2 hours later I woke up in the ward.

I did not feel good at all I did pre warn the doctors that after surgery my bp always drops majorly as does my temp I have also had to have a blood transfusion after a past surgery so it was pretty intense that coupled with the doctor telling me that my bladder had drawn into the area they needed to cut meaning they could nick my bladder in the process it was quite scary, I will say that I hate being put out I would much rather have a spinal and be awake for 2 hours than be knocked out but anyway it was over and thankfully they managed to get away with my bladder intact, I was however freezing my temp was 32/33 and my bp dropped to 60/50.

they struggled for a while but eventually that was sorted and with the pethadine pump I was pretty much in and out for the rest of the day, hubby stayed at my side and I had an awesome room mate who had also just had a hysterectomy so it was a nice change.

I went home 3 days later, I managed to pick up an infection yay me so went home with a bag full of meds but I was soooooooooo happy to go home, I will say that the pain was waaay different this time compared to my ceasers I did feel quite a bit of pain this time and I did struggle with my normal activities for a few days, but 2 weeks later I feel good I can pretty much do everything normally and have pretty much packed up our home ready to move.....

My feelings after this op, I had good and bad days within the first week I got very emotional a few times but it seems to have passed I am still sad but if hubby and I ever feel we want another baby in the future there is always adoption and surrogacy and if we don't get there well then it is not meant to be, I have 3 amazing healthy happy boys, I have had 8 pregnancies in total and therefore have had my fair share of heartache and the toll these have taken on my health and body... it's probably best that I cant have anymore.... I have severe back issues, my eye sight has severely deteriorated and of course all the uterine issues and infection issues I had, all worth it I would do it all again in a heartbeat but I think it was just time to do this and let go, I am truly blessed my life is amazing and I have so much to be thankful for.

That aside we are officially moving to our new home in 2 weeks and I just cannot wait we are so excited it has been a crazy road to this point but we just cannot wait to have a place to call our own, for the boys to have room to play and space of their own where they don't have to tread on eggshells all the time and of course Jesse will have his own room yay, hopefully this means we will have a better sleeper from next month because omw it has been a year of no sleep and I would appreciate getting it back at some point.... it would be nice

Email ThisBlogThis!Share to TwitterShare to FacebookShare to Pinterest
Labels: My life, Updates