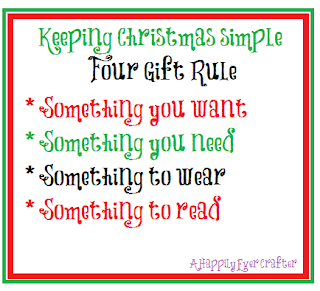 I remember most vividly the first Christmas after my ex and I separated, I remember it so vividly because it was the year that I went completely overboard with Xmas for my then 2 boys aged 3 and 1, I am talking an entire trestle table of gifts it was complete madness, and why?

I felt guilty, I felt sad and I felt the need to over compensate and by the end of it my kids were overwhelmed and if they played with anything I had bought for more than an hour it was something.

Since then we have gone through varying stages of the amounts of gifts bought and as the years have gone on I have realized that I need to bring it down a notch.

I am not Christian and have never been mad about Xmas in general so for the most part it has always been more about the gifts for my kids and I realized that not only is this a senseless waste and a support of rampant consumerism but I don't want my children to go on through the years just expecting and wanting and needing more, tomorrow I may only be able to give a bar of chocolate and that should be enough.

So after reading an article online I decided that this year we would be going through our own interpretation of the 4 gift rule and by that in our case I mean 5 gifts.

So if you are not familiar with the 4 gift rule it includes well 4 gifts that pair with the following;

There are some variations some people include a hobby (something to do) or a handmade item, I quite like the idea of like a baking kit or something as well to do as a family.

Now in our case I am allocating 2 gifts that they really want but you get the gist of it, I think it is an incredibly nifty idea.  It will mean that my kids get a small amount of well thought out gifts rather than a mountain of useless rubbish that they don't really want or need, it will mean that they will have a greater appreciation for what they are given and it will allow for some money saving on our part so that we can fix up our home which we never have the money to do.