baby steps can be milestones

For every parent a child's achievement, no matter how small is usually a moment or something that fills ones heart with joy and pride.... and I know I can only speak from my own experience as a special needs mom but when your child has social, emotional, physical or learning barriers and they achieve something that you may have thought to not be possible, those moments are beyond anything I could ever describe, because sometimes even if you only share these worries with your own self there is always a what if at the back of your mind or a question of whether you child may ever be able to achieve certain things based on their disorder or the 'issues' that arise from it.

Loghan has been taking hip hop classes for a year now and for the most part it just started off as something I saw as a fun activity that allowed him to be active and as a plus socialise with other children his age and maybe even dare I say it make friends.

It was never something I saw as anything serious and to be quite honest Loghan has never stuck to any activity for much longer than the span of a school term so I wasn't even sure that it would last,  I mean we have gone through the full list from Karate to Soccer to Chess and everything in between but he has proved me wrong in ways I could never have comprehended.

I am always a helicopter mom when it comes to any activity outside of my home and I always feel so guilty, am I the only mom who calls to follow up on their behavior every hour, who threatens them within an inch of the value of their technological items to ensure that they are on their best behavior... probably, and it feels terrible, other moms must think I am an absolute nutter.

Getting back to dance though, so a few month ago we were notified that the dance school would be putting on a full stage production... q a panic attack, last year Loghan took part in a mini demo and he was incredibly nervous and ended up forgetting the steps, he refused to smile, and I had reoccurring flashbacks of this occurring again, except that this was now a very expensive and properly planned and advertised production, so it was of course very important that all of the kids knew their routine, showed up for rehearsals and behaved themselves in order for the practices to run smoothly. 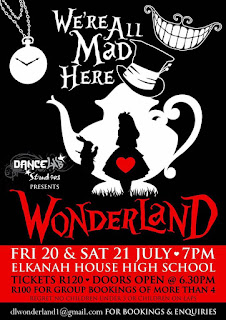 This past weekend was d day and he preformed alongside his fellow dance students, up until then the past month had included very rigorous and regular rehearsals over the span of a few hours each time and we had to leave him there to get on with it and just hope for the best...

Not one phone call and every rehearsal was met with excitement, he practiced over and over and he could not wait for us all to attend the show.

If I tell you I have never been so proud, I would not be lying, the tears flowed as I watched Loghan dance,although still with a frown on his face and somewhat robotic movements which is typical of many spectrum children although not all, but he did it and afterwards as we were filing out he was embraced by fellow dancers and he was smiling from ear to ear with pride over the shared excitement and of course his own achievement.

There are days where I have sat and wondered will Loghan or Gabriel ever be able to achieve certain  socially acceptable conventions, it is incredibly difficult; its not that I don't believe that they could but it is always a concern when your child does not generally fit the mold of what is deemed socially acceptable.

It may seem silly to some that I see this as such a major achievement, but seeing Loghan commit to something, follow through with it and do it, whilst making friends and not causing any disruptions etc, it really something special and then for him to go out on the stage in front of so many people.... it was something that I hoped would go well but I never allowed myself fully embrace how well he could do until I saw him up on that stage.