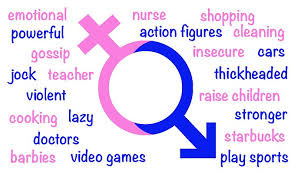 I'm sure most of us grew up with gender stereo types in some or other from, girls wear pink and boys blue, girls should be soft and feminine and play with dolls whilst boys could be loud and boisterous and needed to play with trucks and cars.

I know I was raised with that mentality even though in later years my brother often wore pink by choice and rocked it and allows my future sister in laws nieces to play dollies etc with him, the ground work of those gender assumptions was always there, it was socially frowned upon for a boy to role play with dolls unless of course he played the working father.


I have 3 boys and each of them are so incredibly different and yet all of them have played with dolls, worn one or another clothing item that was pink or purple and a firm favourite was to prance around in my heels when they were all around the ages of 4 or 5 years old, it never concerned me, when members of the older generation remarked that I was going to turn my children gay I literally scoffed out loud and politely told them that even if my child were to turn out gay it would not bother me but allowing them to express their individual feelings and personalities would certainly not establish their sexuality in any case.

I remember I believe it was 2 years ago at Christmas time Gabriel asked for one thing and that was a kitchen set, and we got him one complete with plates and food and cutlery even a shopping trolley, when he opened it his eyes lit up with happiness and I was so proud to see him playing with it that morning, my Ouma popped in to visit later that morning and when she saw the set she asked which girl we had bought it for, when i told her we had in fact bought it for Gabriel she was mildly horrified and berated me for at least half an hour, it upset me that anyone would choose to see such a wonderful experience for my child as something to be ashamed of, I didn't of course tell her that he had also mentioned wanting a doll but he had told me to late and i had been unable to find the one he wanted (although I was incredibly tempted), so what my child likes dolls and cooking sets just as much as he loves dirt and legos.

why is there a need for gender stereotypes and who decided that there needed to be any in the first place?

Did you know that in many European countries boy babies actually wear pink and girls blue?

To be honest I have come to expect these assumptions and behaviors from the older generations, however today I saw a post where a younger woman commented on these stereotypes and how it was wrong to allow a boy to wear pink etc, I was even more upset when I saw that a few woman agreed and went even further saying that the other woman were encouraging their sons to be gay... erm hows about no!!!!

Your sexual orientation is not a choice and even in today's society being gay or bi or trans sexual can be an incredibly difficult path to walk, the judgment and mistreatment is still very much prominent even in today's society, playing with dolls and liking pink does not make you gay, your sexual preference does and this is not established by an action or mark of childhood although many LGBT persons do prefer or enjoy wearing clothing of the opposite gender or a dramatic flare.

My list of friends includes a fair amount of gay men and lesbian woman and most of them do not conform to the typical LGBT stereo types and as far as I am aware the majority of them had amazing childhoods with loving parents etc... I could go on.

Its time society learns to embrace each other and to raise our children to be non judgmental and understanding, in encouraging self expression and awareness we an make this possible!
Posted by CrazyMommaofThree at 12:51