What are boys made of?


We all know the rhyme right, frogs and snails and all that. 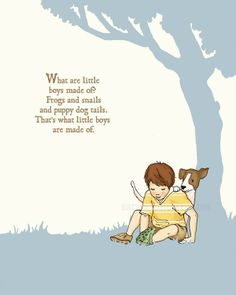 When I think of that rhyme I think especially of my second son Gabriel.

He is literally always covered in snot and muck, he wipes his nose on his sleeve, he messes literally everywhere, there is always chaos around him when he plays, and yet he is a frikken conundrum because when it comes to shower time he is meticulous, making his bed is like a military event and cleaning dishes etc is done to perfection.

So this morning when I pulled out his clean shirt and shorts for him to put on I stupidly convinced myself that it would stay that way for at least a good portion of the school day… I was so wrong, when I dropped him at school and gave him a hug I did a once over and was HORIFIED when I saw his shirt which was now covered in food and what looked like chocolate milk… he didn’t have any milk or cereal so gods only know what that was, it was everywhere from his collar to the button strip and I was mortified.

I glance at my watch… no time… shit

I realized he had a jersey in his bag he needed to return and in desperation I apologised to the universe and made him put it on and sent him in, I then jumped in the car sent his teacher a message and tried to not think about the ghastly state I had sent my son to school in…. when I missed my turning to take Loghan to school I knew I couldn’t let it go, I raced home got a new shirt, dropped Loghan off and raced back to the school, by then the parking spots were full and I had to park in a side street and walk… well sprint up, I found Gabriel pushed him into the nearest bathroom and made him change… oh yes and I managed to locate one of his two lost jerseys on the lost and found table as well, so score for that…. Crises alleviated and I still managed to make it into work just on time….

Am I failing or is this just a boy thing?
Posted by CrazyMommaofThree at 00:47