So for anyone who watched my vlog a few days ago I picked up a few things from LUSH and did a not so little haul, well afterwards I was finally able to let loose and try some of the products and the Honey Bee bath bomb was one I was really excited for.

I was going to vlog the bath bomb experience and how it takes to the water but to be quite honest after trying half of the bomb as I cut it into two it wasn’t a very exciting one so I decided it would be best to just do a written review.


This bath bomb is one of their plain Jane’s, it is very simple in appearance and suitable for sensitive skin which is one thing I like about it, its somewhat simple/ unappealing look of mottled grey and yellow has meant that it has been overlooked by me every time I go into LUSH, however during this past trip I decided to give it a whiff and it quickly found its way into my basket. 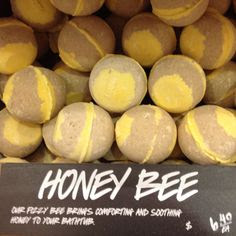 It includes the same ingredients and is supposed to smell on par with the Honey I washed the Kids soap which I have come to love, it doesn’t smell exactly the same to me but it came pretty close and I was really excited to try it and see what effect it had on my skin and relaxation etc.

I was somewhat disappointed…. I didn’t expect it to give off a show as some of their other bombs do but I did expect it to have a soothing and calming effect ion my skin I was also hoping that it would soften the water as most of their bath bombs do.

However it didn’t do much in my opinion for my skin or to the water and it left the bath water yellow, which I was expecting but it really isn’t the nicest colour to have your water turn (take note LUSH) it also left a ‘lovely’ yellow ring around my bath that was incredibly stubborn to remove, so this one was rather a miss for me which is sad because it really does smell wonderful and I would have liked to have added it to my list of staples from the store.

I did manage to vlog the Twilight bath bomb though which was a bit more of an experience and I will be putting that up hopefully this week- our internet took a nose dive with the load shedding schedules this past weekend so it has been rather difficult both to blog and edit a vlog at home, anyhoo I hope everyone is staying warm in what has turned out to be a bitter cold winter in Cape Town and that all the mommies are breathing a sigh of relief as the kiddos started school yesterday.