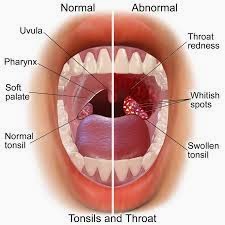 So we had Jesse's pre-op appointment yesterday afternoon and confirmed that Jesse will be going in for surgery on Friday morning for the removal of both his tonsils and his adenoids.


The doctor said that after my hubby and Jess had left last time she thought very much about Jesse and that since his breathing has been affected she feels that we need to remove his tonsils as well- she said that surgical intervention is not something she would recommend unless she really felt it was needed but that it is still our choice, we decided to go with it.

It has been extremely stressful at home- after being told that your child stops breathing in their sleep its ver difficult to get a proper nights sleep.  I am so scared I hate putting him down for the night and toss and turn and check on him frequently hubby also spends most nights up with him when he does wake up, the nasel spray has helped to relive his congestion at least but it hasn't solved the problem so we decided to do what is best for Jesse and go through it.

So we will need to be at the hospital at 6:30am on Friday morning, thankfully since he is the youngest he is 1st on the list which I am in credibly grateful for as he will not be allowed anything but clear fluids and black ta after midnight and then nothing from 4am, since we are still breastfeeding and since Jesse's favorite feed is the 6am or so feed it is going to be very tough but we don't have a choice as giving in can cause severe implications.

He will go in about 8 and should be out and in recovery within 20 minutes where he will stay for a little while and then be taken down to the ward, he will be expected to eat and drink before he leaves a few hours later- normally they give nik naks and coke- but Jess can eat nik naks yet and I dont even drink cok or allow my other kids to drink it so that is not going to happen but the doctor did say flings is rough enough and we will take some juice with as well.

She did tell us about all the complications that can arise, it was a long list and quite frankly I almost burst into tears this is my baby my 15 month old baby I don't want to hear that things can go wrong even if it is a small percentage, I have faith that Diana watches over all of her children and that all will be fine I just need to keep telling myself that.

she also said that adenoids do grow back and he may need a 2nd op after a while..... but that the tonsils are very unlikely to grow back- now having had tonsillitis after a tonsil removal I do know that they come back however as she said if the do its often just the bud of the tonsils and shouldn't cause any issues.

She said that he will probably wake up miserable and that we will have a very fussy baby for a week but after that right as reign and we need to ensure that he eats so that the tonsil bed is scraped and cleared daily this avoids infection and any other issues.

Please hold us in your thoughts I know it is a somewhat standard surgery but it it is very stressful for us that and the fact that our medical aid wont cover the whole procedure but hopefully my gap cover SHOULD cover everything else.
Posted by CrazyMommaofThree at 23:41

Email ThisBlogThis!Share to TwitterShare to FacebookShare to Pinterest
Labels: Motherhood, My life, Updates