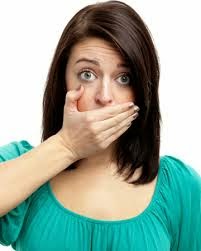 oh shit... the words escaped my mouth before I even thought about it- That's a bad word mommy said Gabriel as he brandished his finger at me sternly.

Personally I can cuss like a sailor when I'm, angry but generally I have a very tame mouth and in front of the boys I do not swear unless its by accident like this morning,.


When I was growing up and even now I was taught that such words were extremely disrespectful to your parents and elders and thus even now its extremely rare to catch either my brother or me say a swear word in front of my parents, I just don't like it kinda like when I smoked I would never ever have done it in front of my parents besides the fact that they scare me senseless its just disrespectful to them so I wont do it.

I have plenty of people who I have met and disagree including several friends who don't have an issue swearing in front of their kids and that's their choice their kids are respectful and mindful of the fact that it is a grown up word and not be used by them however I have had friends go through embarrassing situations whereby their children have sworn at school or in front of an elder or someone important and what can you do, its not the child's fault they are just mimicking their parent.

my ex used to swear badly in front of the boys and we did have a situation where Gabriel swore in front of an adult it was so embarrassing for me because I got such a look from said elder as if I was such a terrible parent and person for teaching my child such things when I didn't.

My parents always used to say when you misbehave people look at us not you and I only saw that when I became a parent myself.

In any case whether you do it or not is your choice, personally I will be reminding myself to mind my mouth in the future as to avoid any future mishaps!
Posted by CrazyMommaofThree at 06:55