Tragedy is a hard lesson learned

Have you ever gotten in your car after 2 glasses of wine and thought eh I'll be ok I'm not to far off from home and I feel fine I will just be careful?

Have you ever been in a hurry to get somewhere and gone over the speed limit?

I live in an open or un-gated complex and our back yard backs onto one of the busy roads in our area, we moved in 4 years ago and since then we have woken up to many a load crash/ bang indicating an accident on that road, we have had cars land on their roof a mere foot away from our wall, we have had cars take out park poles, people who have been drunk, reckless or in a hurry.

On Tuesday eve just before midnight we were lying in bed when we heard that familiar bang, I looked out the window and could see the car in all its glory, a complete right off smashed in from all sides, we ran out and looked over our wall and could see that one passenger had been ejected and flung across the road and that the other had been flung alongside our back wall narrowly missing both it and the park poles that line that area.

This is the first time that I have felt compelled to run to the scene, in past experiences there are usually so many people on the scene so quickly that we have never wanted to interfere but this time we both ran.

I sat with the one gentleman and my hubby with the other, we sat there waiting for the medics trying to keep them still and awake and sat there whilst the medics went to work, we sat there whilst the ambulance arrived and until they had taken the men from the scene, the gentleman I sat with was in bad shape conscious and able to talk but with graphic injuries to both his face and head, he was literally ejected out of his shoes as was his friend... how they managed to survive is beyond me as they took out 2 trees as well as my neighbors wall, according to a witness they had come barreling down the street at about 200 k per hour, the road has a slight curve to it and the driver going so fast unfortunately hit that curve ramped the side path hit the 2 trees then the wall and the car flipped ejecting both him and his friend from the car, they were not wearing seat-belts, they were a block away from their home it was stupid and unnecessary and the most traumatic part for me was not the blood or the injuries, it wasn't the state of the car... it was seeing the wedding band on the mans finger and wondering how anyone would be able to call his wife should this man die, it was the thought of the possibility of kids and a family as well as the fact that he narrowly missed another couple coming down the road and could very well have killed them, to see their families approach the scene the one wife hysterical... was it all worth it for that joyride and a possible drink (unconfirmed but I could smell it)

It was a very sobering wake up call for all the times that I have driven just that bit faster or shrugged off a glass over the limit because I feel fine and am a short distance from home- did you know that more than a third of accidents happen withing 1-10 km from home?

A scary thought and one I will not soon forget.... 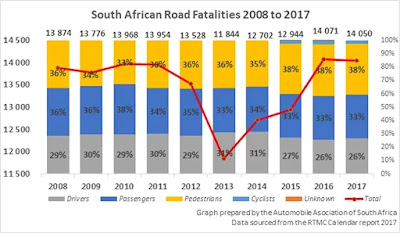