I have three monkey boys and at some point or another both of my older two have had their hair either by their own hand or by that of a peer snipped with scissors all willy nilly, thankfully all incidents have been minor and/or fixable so it is with a very heavy mom heart that I write this post today.

This past weekend was just crazy, my older 2 were at their dad and we didn't stop moving from Friday night when my ocd kicked in with full force and I suddenly had an urgent need to clean out all my kitchen cupboards and scrub until well past 1 am up until the point where I climbe into bed at 11pm on Sunday evening, in between everything I got a bee in my bonnet as I often do and decided I wanted to do some paintwork in the house and that hubby needed to do some things as well.

So whilst I am painting away on Saturday afternoon and hubby is sanding Jesse was snipping paper behind him in our back yard, literally a mere feet away, when all of a sudden I pulled a literal clump full of hair from the wall I was busy painting.

Now Jesse had been running in and out between us so my first thought was that he had somehow run past and lost some hair to the semi dry paint in the process, but after a second of thought that did not make logical sense and I quickly summoned my hubby in distress, he went off to the yard and found Jesse sitting next to our outside bin a clump of hair in one hand and hair scattered all around him, I heard him laughing but you know that kind of laugh where you actually want to cry and when I found them my heart sank because Jesse had taken a significant amount of hair off at the back of his head and all that remained in certain areas were tufts that stuck up in all directions.

I attempted to save it... but I couldn't and thus just summoned the electric shaver with my hubby, Jesse was all to happy even though I have asked him many times to cut his hair he has always said know and been upset at the thought or mere mention.

After I was done I looked at his face and literally burst into tears, my heart broken into a million pieces, no more baby locks, no more baby face, a real boy as Jesse said afterwards, don't get me wrong he is gorgeous all the same it was just a huge shock and I felt so terribly guilty that we had not been watching him more carefully.

This monkey face couldn't be happier though!I just cannot get over how different he looks! 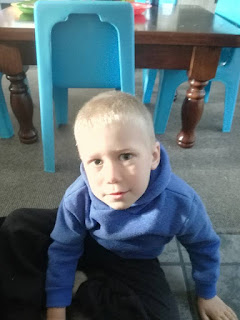