A rainbow of love...

I have been in two minds about doing this post not because I have nothing to say on the matter and not because I disagree with anything that has been said or done but simply because most people know very well how I feel about this matter- when it comes to the rights of the LGBT community I am very loud so here it goes.


I have to be honest in saying my parents never said or brought me up to believe that being gay was wrong and I think this has a lot to do with my mom being Atheist so I was never told this was against god or church by my parents even by my dad who is Christian, his comments may not have been entirely approving but he never once said that it was wrong or brought us up against it, as for the rest of the people I knew they had their views but being a very strong willed child I could never understand why anyone had a problem or any say with who another person chose to love and that is the truth of the matter isn’t it, neither I nor anybody should have a say in who another person chooses to love or live as whether it be as a man/ woman/ both or gay, lesbian or bi sexual it really has nothing to do with anyone else and should be the choice and right of each and every individual no matter their culture or religious beliefs.

I believe very strongly in love and I believe that you fall in love with a person and not their gender race or culture these factors may help in how you approach a person or share interests with another person but they won’t change the love you have for someone, this is my personal opinion and I know many people are only attracted to men or only attracted to woman… so what, why is that a bad thing…

The people who say it is against gods will, why, why would be against a god who supposedly loves and forgives unending and if it were would you truly want to worship someone who loves selectively or expects people to live a lie or miserably because they are forced into it…I honestly don't believe that to be true I may not be Christian or believe in one god but I do believe that no loving Deity would do this.

To the people who say that you are not born that way you choose to be that way… I believe that there are people who choose to turn to same gender partners etc for certain personal or psychological reasons however almost every single LGBT person will tell you that they can remember being the way they are from childhood…. This has been proven time and time again and children as young as 5 have been recorded by their parents as having displayed feelings or attraction towards a same gender individual or displayed actions and feelings of being the incorrect gender for them.
Lastly there are those who say that a LGBT person will never make a good parent or will set a bad example to their children… seriously you know what sets a bad example?

People can be strait and terrible parents, being a good parent and loving a child has nothing to do with your gender or partner choice and I think you are sending a wonderful message to your children by teaching them that being comfortable within yourself is the right way to go and not to conform to what you perceive the right choice to be is as judged by your peers or the people around you…

At the end of the day we are moving forward and everyday new steps are taken to open the eyes of the world and fill it with understanding and love, Caitlyn Jenner may not have been the first but she has certainly created an acute awareness to the topic of the transgender community, just as America is most certainly not the first to legalize gay marriage however the hype is all worth something if it creates an awareness and better understanding around the LGBT communities, I am extremely proud to live in a country where gay marriage is legal and I am extremely proud to have witnessed the marriages of more than one gay/ lesbian couple, all of these couples found each other and together have made marriages that put most strait marriages to shame- they have built homes together and started families together beautiful families full of love and understanding….

There is still so much hate in the world take a step in the direction of understanding and open your eyes or the eyes of those around you to the needs and rights of others.

Everyone deserves to be happy and comfortable within their own skin and everyone deserves to love and be loved, so cliche but one of my favourite quotes is ”the greatest thing you’ll ever learn is just to love and be loved in return”… and that ladies and gentleman is what matters, love and understanding is honestly not much to ask for and in a world filled with so much hate, prejudice and anger it will go a long way in paving the way for a better future for all. 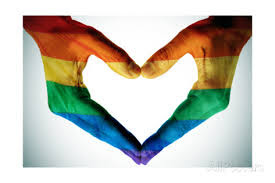 Email ThisBlogThis!Share to TwitterShare to FacebookShare to Pinterest
Labels: #rainbow of love, LGBT