Dont you just love it when.... 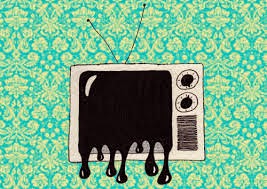 Don't you just 'love' those people, you know those people who are like I don't allow my kids to play video games or watch t.v the need to play outside and learn to entertain themselves bla bla bla.

I am not saying kids shouldn't play outside not at all of course it should be encouraged however if I have more than one child and they are fighting and moaning and being difficult and they ask to watch t.v because they are bored I'm going to say yes- hello I have things to do as well I also need to cook and clean and if an hour of t.v is going to give me some time to do those things or to even to just sit for 5 minutes then I'm going to do it.


My children are healthy, the read they play outside and they watch tv they are not mindless or stupid, they are not unable to entertain themselves although my 7 year old does find it harder to do so but that has been in his personality since babyhood.

I don't see the big deal I really don't yes its counterproductive but seriously is an hour or 2 going to kill them, and let me jump in and say that we are super selective about what the boys watch I don't allow any mindless nonsense like most of the stuff they seem to have on tv these days- we stick to disney/ pixar and cartoons that either involve some sort of moral or actually teach them something some of the favorites in our houshold include:

We usually make sure to watch everything before the boys see it and we try not to let them sit infront of the tv for longer than 2 hours especially if it is a sunny day out, if this makes me a sucky parent well then so be it... here are my top 6 things that irk me when said by another parent or even worse someone who has no kids:

- how about they are my kids and if I allow them to sit in front of the t.v its my prerogative

- its in their mouth isn't it

3) If that was my child I would

- well its not your child now is it

4) When my child does this I do such and such

- well then why are we having this conversation

6) t.v rots the brain you know

- o.k tell that to my well above average 7 year old who just LOVES t.v and video games

At the end of the day it is your child and you get to decide what you feel is best for them it is not your place to tell other people how to raise their children- if their child is fed, clean, happy and healthy then back off and don't give advice unless it is asked for- you wouldn't want someone judging your parenting so why would you do it to anyone else! 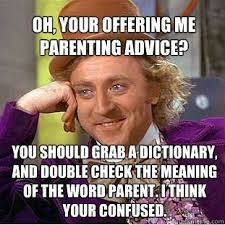