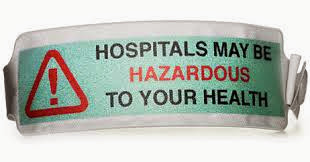 So after an app with my gynae yesterday we were discussing the difference between good health care and well crap health care.

I feel very privledged to have had access to private hospital and medical care it costs us an arm and a leg every month but it has been well worth it.

A few weeks back a friend of mine gave birth to a gorgeous set of non identical male/ female twins, she gave birth at Somerset a government hospital, 3 of us decided to pay her a visit what a mission to find the hospital but in any case we finally got there and I am going to delve into a few things that I consider constitute crappy health care...


First off when we approached what you would call the information desk they did not seem very happy to help and look up where our friend was lying they seemed very irritated that we did not know which floor she had been taken to and then proceeded to give us these tiny white stickers with a v handwritten on it indicating that we are visitors.... hmmm ok, after wandering around for a while and taking the stairs up because there was only one working elevator and it was busy we finally got to her floor, after searching for a nurse who also didn't seem very happy to help they said oh go to the 2nd room and they just pointed ok fine, we went there and she wasn't there so we turned back and guess what not a nurse in sight, in the end it was the tea lady who told us where she was and where to go, thank you so much she was incredibly helpful and kind, so off we go and we reach the floor before we realise it we were allowed with no security no nurses in sight to simply walk all the way into NICU where our friend was sitting in the incubator room with hers and the other preemie babies, she was allowed to show them to us even after the nurses saw us there and she was allowed to come out and sit with us no issues no handwashing etc.

To say I was shocked is an understatement the fact that there was no security at NICU or on the maternity ward in general was just scary.... they did however check my boot on the way out the parking lot. You never know someone may just smuggle a baby out in their boot... well how about you have proper security measures in place, then you wouldn't need to do so, I mean what if I was carrying a baby wrapped in a blanket and walked out they probably would just presume the baby is mine and let me go.

A second person I know has also been at Somerset the last 2 days she is in the beginning stages of labour, she was first laboring with another woman beside a woman giving birth to a still born.... that to me is just heartless could they not think about this when she came in put her somewhere else. That aside she has been told to go home and come back more than once because she has not progressed enough and they obviously need the bed, well if she was in private care they would have broken her waters by this time to help progress forward they also won't do this because they feel she is 34 weeks after more than one privately done scan has placed her at 37 weeks so now you are left with an exhausted mom, who may now not have the energy to get through the birth properly I have seen this lead to a c section so many times, to top it off her baby bag was stolen from her mothers side while she fell asleep in the waiting area, who the hell is so cold that they would steal a baby bag.

I understand that this is state or government care and I understand you are not paying for but for mothers sake there should still be a certain standard of care provided to these people and these woman.

There have lately been a few complaints about the hospital I have used since they opened in 2007, my eldest was one of the first babies born there and I have always recomended it to everyone, they have of late changed one of their service providers so I will say my stay 2 weeks ago was not as pleasant as my previous stays, the food was bad, they woke me up at 4:20 for coffee, dirty dishes were left for a few hours so it wasn't pleasant but you know what it was still a hell of a lot better than what I saw at Somerset and what is the norm at all government and even some private hospitals.

So this leads to the topic of what depicts a good standard of care, while I understand you want your stay to be as pleasant as possible, it is nice to have good food etc, and yes the hospital now needs to take theses complaints and use them to make a change for the better which I am, sure they will do because the particular doctor is already losing patients, I think this is just silly.

I would much rather have an amazing doctor and nurses and excellent health care and security, than good food.

The hospital I am refering to is blaauwberg netcare when you come through the doors it is as if you have walked into a hotel lobby, it is gorgeous and clean/ modernised, the staff and security are incredibly helpful and I am yet to see a miserable staff member.

The doctors are impecable and at the top of their game as are the nurses who are compassionate and helpful, the security is extremely strict you have to sign in and out with id numbers everything, you cannot simply walk in and out whenever you want and there are always nurses around to help.

Everything is explained to you and there are always quick to help, the hospital is clean at all times, it is just a world away compared to what you see everywhere else, I have been to other private hospitals and you cannot compare the 2, the equipment is also the newest in the western cape and since the hospital is well funded they are always up to date with machinery as well as all the modern health and treatment techniques, in short the few issues they are having at this time are simply teething issues that can be easily changed and I think some people are just spoilt brats, I understand you are paying a large amount for private health care this year alone our hospital bills have been in the range of 100k, so I understand you expect perfection but you know what these things happen, complain and make sure to see a change but don't let it make you turn around and go complain publicly to whole of a social network how terrible your one experience was and therefore no one must go there, it made me really sad to hear that because of that the doctors are losing patients- because they truly are so amazing.

I think those of us who have access to private health care should be really grateful, I have seen such filth in government care when my husband was rushed from an accident to a government hospital before he was on medical care we sat for 8 hours waiting to see someone there was one doctor on call and no one is interested in helping so we just ended up leaving eventually, I had to sit seperately in a waiting room and when I went to the loo OMG the stall doors were broken, the floor was filthy and bloody there was no toilet paper the taps were also broken it was disgusting and I have heard so much of the same thing from friends who have been on the maternity ward, that some woman end up giving birth on the floor or in the bathroom, that you are often made to sit for hours laboring in a chair because there are no beds, you are left to sit in your blood and waters they don't change sheets, the bathrooms are shared by all the ladies on the ward and are left filthy and bloody, you are not allowed to bring in a bottle or pacifier at all it is not allowed no matter your circumstances and if you do not get to the hall for meal times with everyone else well then tough you don't get food.

I will add that after my hubbys stint in the waiting er area they sent us a bill for several thousand rand when they did nothing at all for him we had to fight it for months before they eventually dropped it, and a friend of mine was left traumatised after her 1st birth ended up as a c section preformed by a student doctor which led to her nearly dying from a blood clot as well as leaving her with terrible scarring and other issues....

So I for one am very grateful for the care I have been able to access for my husband who earns enough that we can afford a medical aid and just in general that I have not had to go through what so many woman and people I know have had to endure!
Posted by CrazyMommaofThree at 02:18